CLICK PE ON THE QUESTION AND YOU GET THE ANSWER

What is chiptuning and why do car makers not make chiptuning directly from the factory? 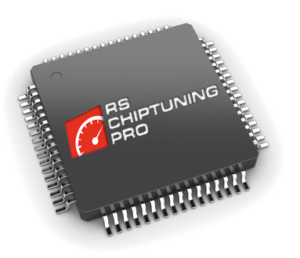 Definition: chiptuning is the SW process that adapts / influences the engine management SW in the engine computer (ECU).

Each car is equipped with an engine contol unit (ECU) with standard factory management software. This engine management software has been developed in most cases with a large margin of control (excess capacity). All car brands produce serial products (engines in our case) and they all have to work anywhere in the world, even in the toughest conditions. Fluctuating fuel qualities and poor maintenance intervals are taken into account. In Europe, engine oil and fuel are of high quality and the cars (engines) are very well maintained. They offer more space than enough for a torque and power increase, while maintaining durability. In addition, it often happens that the same engine appears later on the market as a stronger version, just to get through the “moral wear” of drivers who already have “old” models. You can see how the same torque is growing on the same engine and sells as an “upgrading” of an older and weaker version (the same engine means lower costs in development and production), the only difference being the parameters set in the SW ECU.

Conclusion: The engine’s working load is much smaller than the one it can actually stand, and hence the big differences in power and torque gaining from chiptuning.

Example: The 2.0 TDI CR from the VW can be 110CP / 143CP using the same engine type, the only difference being the different settings set in ECU SW directly from the factory.

RS Chiptuning PRO uses precisely this margin (excess capacity) and optimizes SW parameters to the ideal values ​​to have uncompromising safety and life of the engine. All SWs were tested and developed using Dyno test bench

the final SW remap results being more power and torque actually measured, plus improved performance in all gears on all speeds.

Driving experience will be completely different.

Gains by type of engine and fuel are:

The particle filter is an expensive consumable on the car, its role being to retain the soot.
The lifetime of the DPF is between 120,000 and 200,000 km, but for financial reasons most customers prefer to eliminate it completely HW & SW.

How much does the software cancel?

How much does physical removal cost?
50 – 150 EUR depending on complexity, requires 1-2 working days.

Will the car remove smoke without DPF?
If the engine has good compression, the injectors and the turbine work in normal parameters after canceling the particle filter the car is not allowed to emit more smoke than a diesel with the pollution standard Euro 3.
Generally, the smoke occurs when the cold engine is started or the first acceleration occurs after the car has moved away for a long time in the city.

Is it beneficial for the engine ?
+ The engine breathes more easily!!!
+ 5% extra power, there are no obstacles for exhaust gases-> https://en.wikipedia.org/wiki/Back_pressure
– 5% reduction of consumption because no regeneration will be done -> https://en.wikipedia.org/wiki/Diesel_particulate_filter#Regeneration
Yes, the engine breathes easier … but man does not! What do I do, I cancel or buy it new?
Customers who have the financial power to buy a new 1000-2000 EUR filter, we recommend buying it. Customers who DO NOT have the financial possibility or want higher engine performance can remove it out of from software and physically by calling on our services. Our customers who have installed after market DPF models have found that their life span was short and that many of them caused problems rather than solving them.
Why should remove it from software and not only physically?
Removal from SW is necessary because the ECU does need to not maintain the DPF by post-injection (regeneration), which is damaging to the engine. Soon frequent regeneration leads to oil dilution, because diesel gets into the oil bath on segments, and definitely after this the turbine and engine are destroyed. Also, besides the “check engine” dash light, the car can enter in safe mode mode (limp mode) and the power will be reduced, resulting risk of accidents. 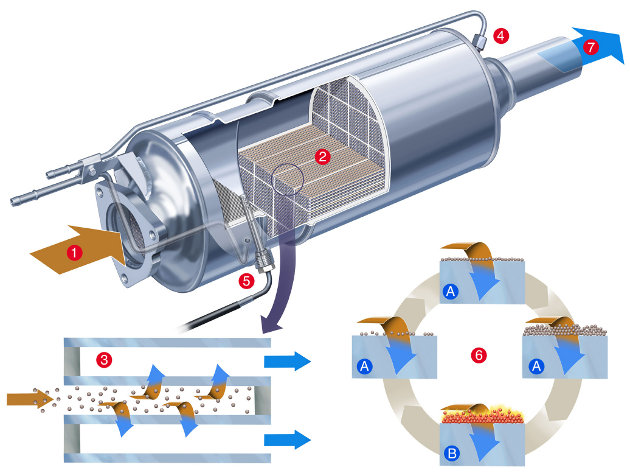 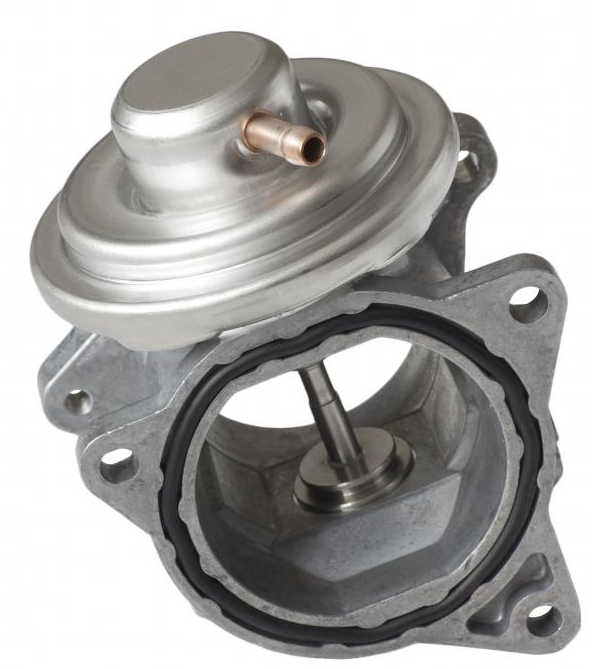 This is the easiest and most common way to read the ECU software. The data in the ECU will be read / written using this diagnostic connector on-board for errors. 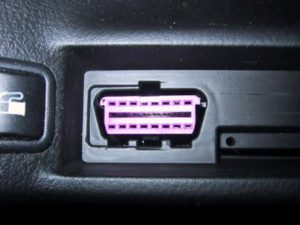 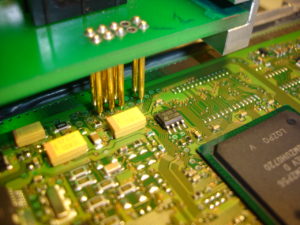 In the new generation of ECUs there is a hard-to-reach memory available through the normal communication line – OBD. Sometimes there is not even an external memory using the internal memory of the processor (TriCore). For these types of ECUs there is a special BDM port. This port is used for chiptuning. In some cases, a dedicated connection is needed, and this must be threaded. For this process, the ECU is removed from the car.

The latest car models have anti tuning protected ECUs, the OBD port being blocked. The first thing to do is to “unblock” the ECU, which is a process similar to BDM. After this is done, you can continue reading, editing and writing SW in ECU. For this process, the ECU is removed from the car. 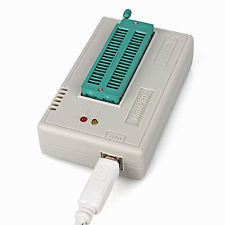 This process is similar to BDM / Boot Mode.

The ECU must be removed from the car and unpacked to access the electronics, in this case the EEPROM. The chip will be removed and read / written using another device. Once it’s written and checked, it sticks to the board back, and the ECU shuts off using a special glue so that no trace can be seen.

Can it return to the original factory SW?

Yes, it can return at any time to the original factory parameters.

Is Chiptuning harmful for the Engine?

No, it’s an urban legend. If a bigger couple would be risky, tuning companies like RS Chiptuning PRO would not exist anymore. Good quality chiptuning maximizes engine performance and simply can not program software that will damage your engine. The software is so well balanced for your car, there is no overload or extra stress.

If we talk about reducing engine life, it is due in most cases to the poor quality or low maintenance frequency, not by chiptuning.

Additional wear of the engine after Chiptuning?

In all the extensive (very expensive) tests made on Dyno, no wear was observed on any engine.

Engine manufacturers build a proper mechanical safety margin and we also do not go extreme with engine load. In addition, in traffic it is extremely rare that you can put a maximum load motor in succession over a long period of time.

How Long Does A Chiptuning Take?

The time needed to optimize the SW of your car normally takes a few hours, but depending on the complexity it can be up to 1.2 days, but these cases are quite rare.

How much time in advance do I have to make the appointment ?

By phone, email or contact form, appointment will be done within 2-3 days of request.

Which type of automobile does Chiptuning offer the biggest gains?

The best results are offered by gasoline / diesel engines with turbo compressor or G-loader (G-lader), between 15% and 40% more torque and power.

Can any car be equipped with a Chiptuning?

The answer is YES.

Nowadays all cars are equipped with an engine management system, the engine being controlled by an ECU (engine control unit) that can be optimized / adapted SW.

What happens if the car ECU receives a software update?

Today, your car may receive an ECU software update. If this happens, you can re-program the ECU based on the new update you received. Many companies do not offer this service, but we do. In this case, the first thing to do is write the original SW of your car and then go to the Dealer. After the upgrade, if desired, a new chiptuning can be done.

No, it’s just SW, the electronics do not suffer any change.

Only the torque and power difference can be “felt” or can be measured directly using a Dyno stand.

What impact does a Chiptuning have on other car workshops?

The optimization made by RS Chiptuning PRO is not easy to decipher by most workshops or car dealerships during a regular service.

Other things to consider when talking about Chiptuning?

The torque and power gains are based on the original safety limits of your car. However, there are a few important things you should keep in mind:

Always drive the car “warm”. The car needs at least 10 minutes of normal running, without sudden accelerating or other extreme regimes, so that the temperature of the coolant and oil will reach the optimum value.

Maintenance must be clean and at the right frequency. Preferably use 100% synthetic oil of the highest quality. Check constant the oil level. The turbocharger is cooled by the engine and operates at 150,000 rpm. Oil is therefore a very important factor in maintaining the turbocharger in good condition.

Should the brake system be changed after chiptuning?

How Does Chiptuning Affect Insurance?

RCA or CASCO insurance companies are not influenced in any way by chiptuning.

Chiptuning for my rented car?

It can be done without any problem, it only needs a written agreement signed by the leasing company.